The experiences of media literacy, the refugee issue and the role of online journalism

An event about Migration and the EU

Last Wednesday 14/12 the event "experiences of media literacy, the refugee issue and the role of online journalism" took place within the project "My Story-Media and Migrants", a transnational project with the participation of Belgium, France, Germany, Greece, Italy, Hungary and Slovenia, funded by the European Commission.

The project aims to provide experiences of media literacy on how to present the immigration crisis in the media and how it is perceived by EU citizens. As part of this, InterMediaKT organized in Patras a workshop including the representatives of online, press and television journalism organizations-helpers of refugees, immigrants, local and international NGOs dealing with refugee and migration issues.

In the first part the participants expressed their views on the current situation and how it presents the refugees and immigrants with an emphasis on possible hate speech seen in some online media and social media while in the second part there was an exchange of views on good practices and recommendations for the proper application of the experiences of media literacy.

The conclusions were moved around the pillars of education, collaboration, empowerment and inclusion. We emphasized in the role of education, the address of interactively citizens and immigrants, highlighting the role and the contribution of  volunteering and the achievements of the volunteers. In relation to immigrants and refugees mainly learning the Greek language in order to facilitate their integration.

For a healthy integration requires clear and precise mapping of refugee / migration histories using valid data, including the correct use of terminology and the separation of the terms immigrant-refugee. Especially in relation to the experiences of media literacy, has highlighted the role of journalistic ethics and morality.

Finally, the flow of the debate highlighted the pressing need for open dialogue and substantial cooperation between all stakeholders, the media, civil society, NGOs and international organizations, a partnership which was also one of the major objectives of both the conference as and the project overall. 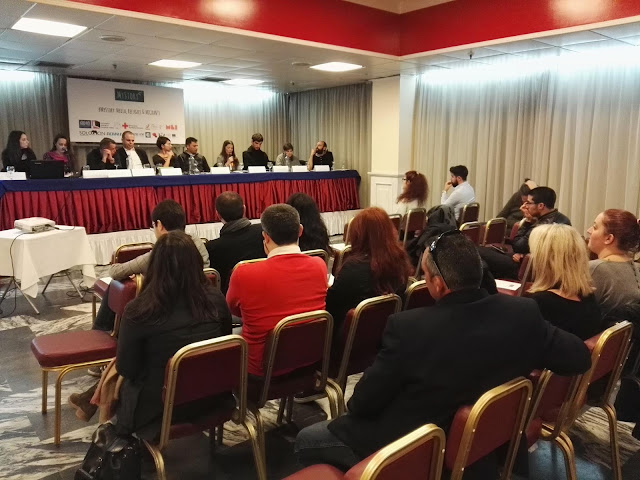 As for the representatives of the One Europe Greece and Cyprus Athanasios Vasilopoulos and Kalliopi Didaskalou they said:

''I think this event has managed, through examples and stories of all the people concerned, to highlight the problems and give the correct guidelines to a better management and view of the events from Media'' Athanassios Vassilopoulos

The event was a good start to discuss about the migration. The success is mainly focused on proper selection of the speakers, who fully covered the subject and the large participation of people.

"Life Lessons" gave speakers with experience of migration , who touched us with their feeling and truth. A big thank to “One Europe Greece and Cyprus” for the opportunity to participate in the event and congratulations to those who organized this day.

It was a flawless event! Kalliopi Didaskalou

The Jewish State is a unique case of how a diaspora created a nation-state (Clifford 1994, 307). However, the arrival of the Jewish diaspora to Palestine and the creation of …

Hybrid Warfare refers to an operation that has covered tracks so that it cannot be characterized as an ‘operation’ at all. The concept, of course, dates back to ancient times …

InterMedi@KT The Interactive Media Knowledge Transfer is a non-profit organization working as a broker for vocational education and innovation. read more

Cem Kocer Cem reports to OneEurope from Brussels Cem (JAM) was born in the Republic of Turkey and grew up in Cyprus, UK, Netherlands, France and Belgium. He holds an MA in International Politics with a thesis on Turkey`s accession to the Europe Union and an analysis on geopolitical relations.