Everything tagged with youth

Internships, is this the new millennium’s slavery?

A voice in Europe

Do You Know How Exactly It works?

On 8th of December the Albanian Youth marks a significant date in tribute to the Students Movement in 1990. On this date a group of students and their professors gathered in the Student’s city to start the protests that lead to the fall of communism in 1990.

The Future of the European Labour Market

A glimpse into the career world of tomorrow

How to Benefit from Being Unemployed

Make the most of your job search

What comes after Generation Z?

EP Elections - What does it mean for YOUTH? 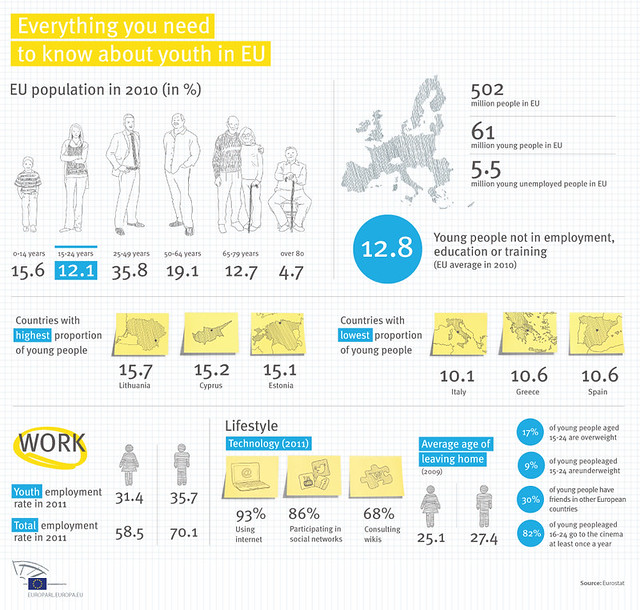 The portrait of a typical Erasmus student

Infographic: the growth of youth unemployment in Europe (1990-2013)

Within the last 23 years Europe has faced a visible rise of youth unemployment.

Agenda for new skills and jobs

More Europeans live with their parents

Half of Europe’s youths live with their parents, making inequality deep-rooted.

Every year, a European city is awarded the distinguished title of “ European Youth Capital”

The European Capitals of Culture and Youth 2014

Read about the importance of the European Capital of Culture and Youth - for 2014: Riga, Umea and Thessaloniki

Volunteering is becoming very popular activity among European youth: some go for it to spend a gap year, others want to gather experience in a definite field, still others volunteer …

Olga Ambrosiewicz Olga holds a BA in Political and International Studies with Sociology from Middlesex University London and MSc in Conflict Resolution and Governance from University of Amsterdam.